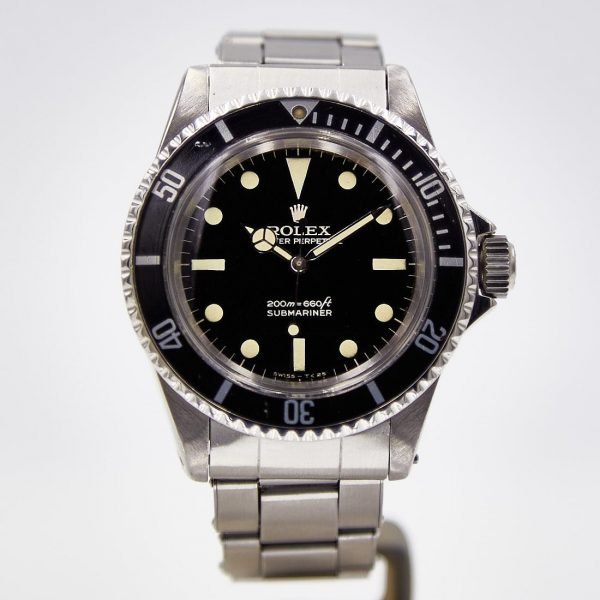 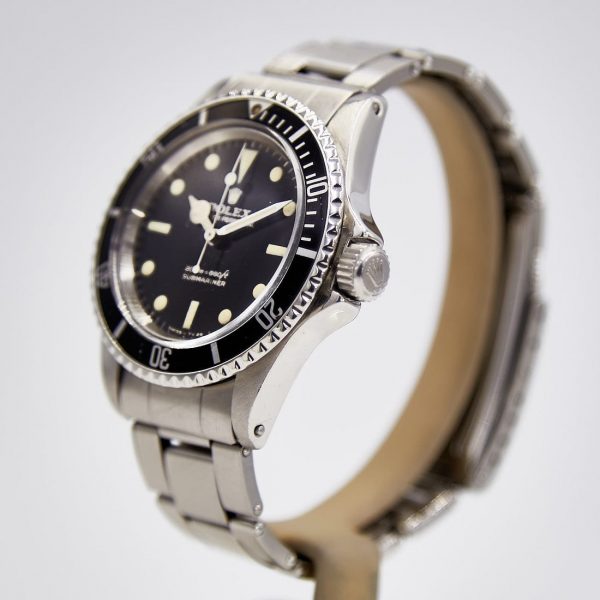 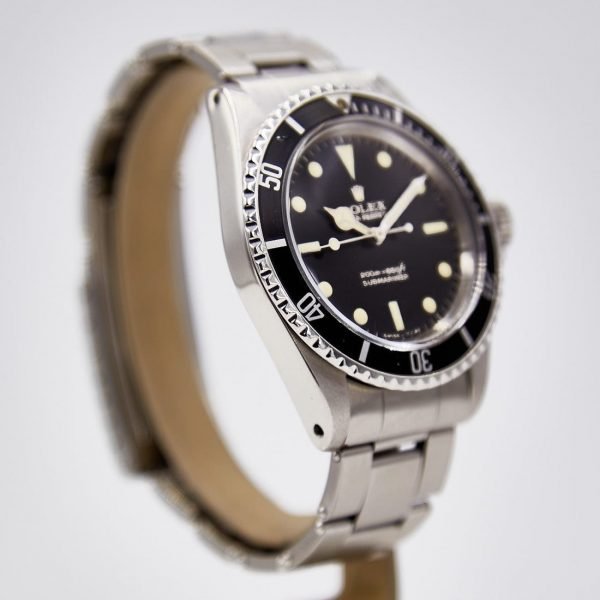 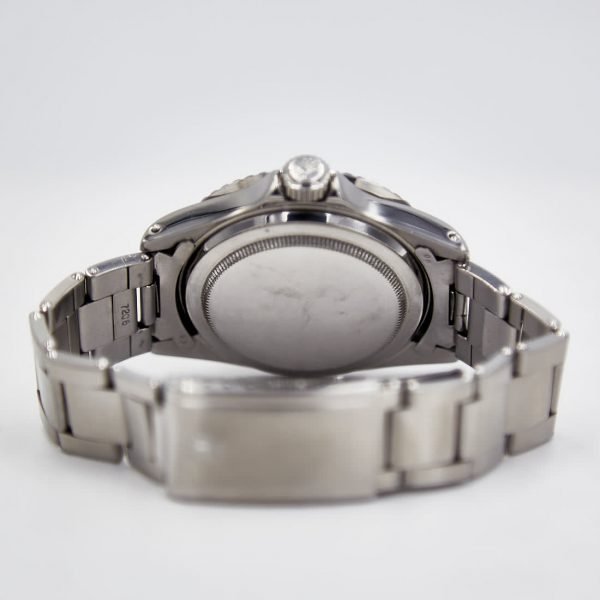 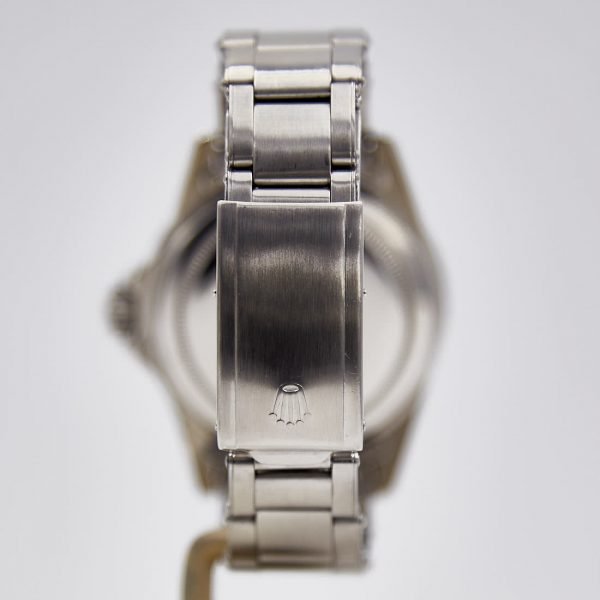 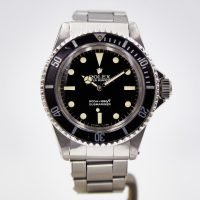 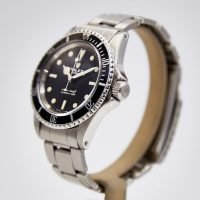 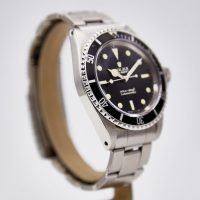 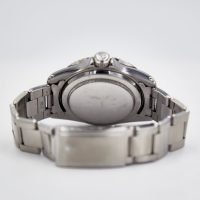 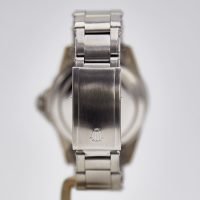 Though Rolex made earlier models named “Submariner,” the modern Submariner traces its roots to the references 5512 and 5513.  These were the first Submariners to feature crown guards and the 40mm case.   The reference 5513 was a non-chronometer rated watch (as opposed to the chronometer rated 5512), which means that the dial does not have the “Superlative Chronometer, Officially Certified” lines of text.  Many consider the reduced text on the 5513 dial attractive and endearing.  They feature a plexi-glass crystal and a depth rating of 200 meters, as opposed to the later 300 meters.  Together with the bi-directional bezel, (which wasn’t changed to the uni-directional bezel until approximately 1977), the reference 5513 looks like a modern Submariner but it is distinctly vintage.

There are many features that make the 5513 one of the most beloved Submariners.  Although the reference 5513 was introduced in 1962, it’s production continued until 1990.  Over the three decades that the 5513 was produced, Rolex continued to introduce refinements and minor tweeks that serve to offer collectors a large range of variations to discover.  While the variations were not limited to the dials, the majority of the variations appeared in the dials.  There were underline dials, gilt dials, matte dials and military dials.  Within each were sub-sets, sometimes with six or more types.

This Rolex Submariner with serial number 1503465 is from circa 1967, which makes it an early production watch. This in itself makes it interesting.  Reference 5513 watches initially included gilt dials, so named for the type of printed font and glossy dials.  This watch has what has been called the Bart Simpson dial, which was the last of the gilt dials.  The dial was named for the distinctive coronet, (Official Rolex crown insignia,) whose points were relatively flat and stubby and reminded people of Bart Simpson’s hair.  Another feature of this dial is the close spacing in the word ROLEX, as well as the crosses on the ‘t’ and the ‘f’ in the abbreviation for feet are in line, which appeals to a person who appreciates balance.   The gilt font was first printed on the dial, after which a lacquer coating was placed on top.  Bart Simpson dials from this era seem particularly prone to “crazing”, which is a kind of spotting or cracking in the lacquer that results from aging.  This watch has this typical crazing, which appears evenly distributed over the dial and seems to add to the natural vintage look, as opposed to distracting from the appeal.  Because this is a gilt dial Submariner, the dial is “meters first.”

This dial featured a unique mixture of tritium and other photoluminescent materials that offers longer lasting luminosity than tritium that appears on other vintage dials.  As a result, people may have concerns that these dials have been relumed.  The lume on this dial is intact and appears with small creases and surface dirt as expected over time from the original lume.

Regarding the rest of the watch, the correct domed plexi-glass crystal is in excellent condition.  The winding crown is the modern, “triplock” style which was the correct factory replacement for the earlier version which Rolex discontinued.  The Oyster bracelet is marked Rolex 7280 with endpiece number 80 iis in above average condition.  While the bezel has a few small scratches, it is in overall very good condition for a watch from this era.  Lastly, the case is free of nicks, has pointed crown guards, shows the brushing on top of the lugs, and the sides appear to have been previously polished.

Rolex is recognized throughout the world not only as a brand associated with luxury, but as a watch that is both luxurious and precise.  For Rolex, this hard-won and well-deserved recognition was never in doubt.  The founder, Hans Wilsdorf named the company Rolex to be pronounceable in any language, as he anticipated the acclaim his company would receive due to relentless pursuit of precision and accuracy in a wristwatch.  Soon after its founding, Rolex produced the first wristwatch to receive the Swiss Certificate of Chronometric Precision, which was followed rapidly by receipt of a certificate of precision from the Kew Observatory in Great Britain.  From those roots Rolex built a legacy of innovation.  The Oyster watch was the first waterproof and dustproof wristwatch in 1926, followed by the first self-winding Perpetual rotor.  Building once again on innovation, the Datejust became the first self-winding wrist chronometer to include a date in a window on the dial.  Adventurous women and men who strive to make history have chosen Rolex for their expedition, which both perpetuates the brand’s claim to precision and dependability as well as attests to its veracity.  Hans Wilsdorf may have anticipated the acclaim Rolex would someday achieve, but even he might have been impressed with its success.