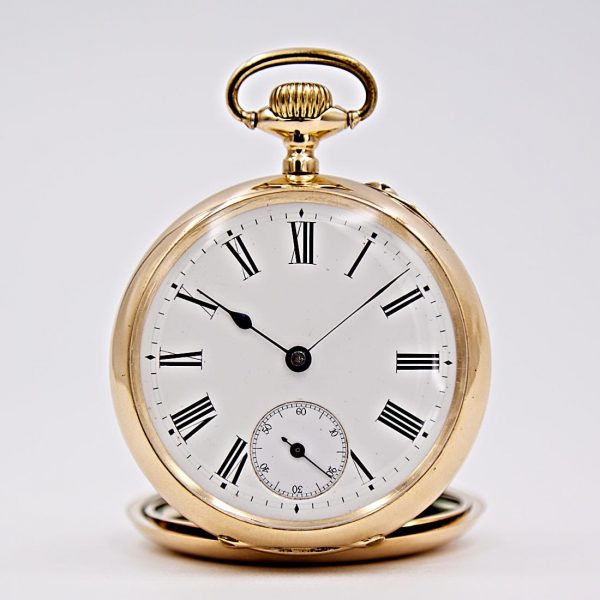 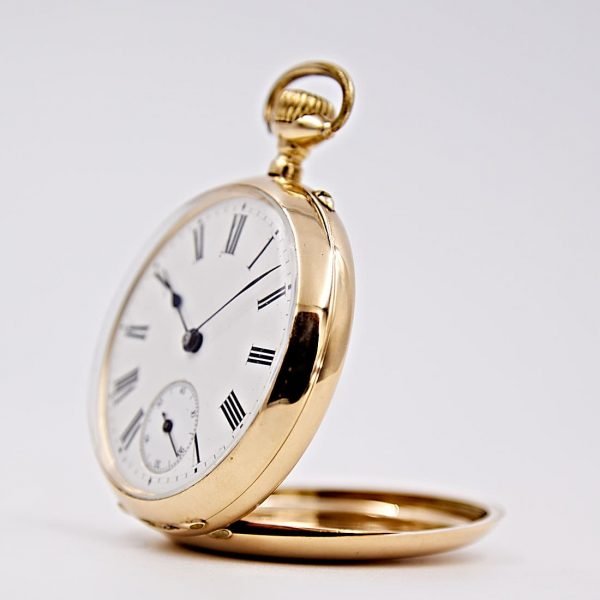 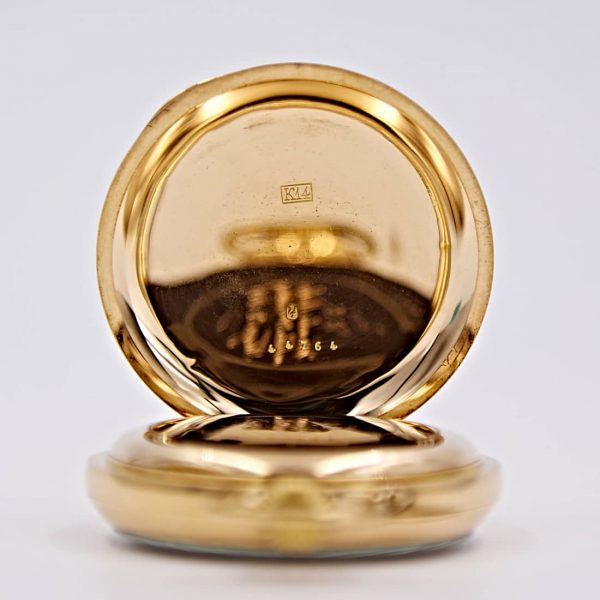 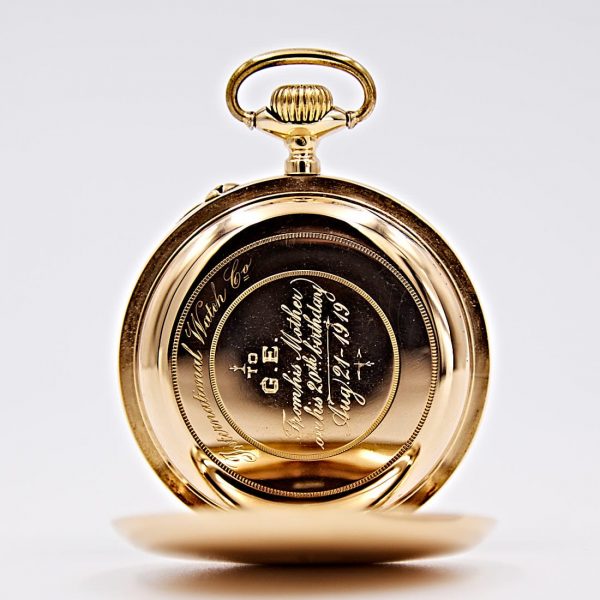 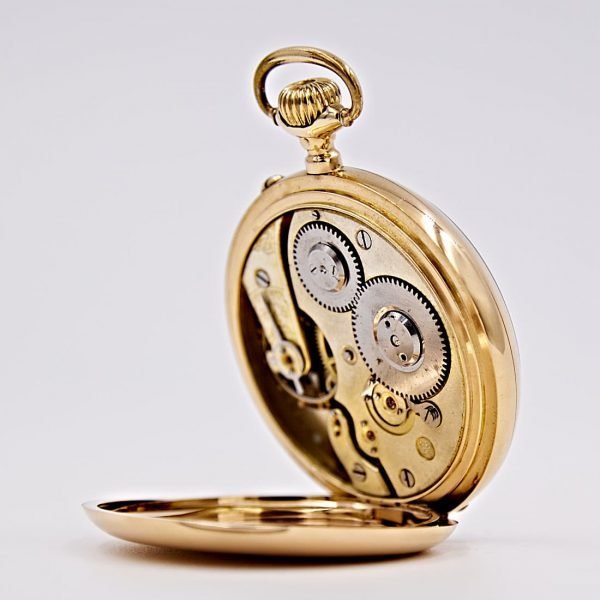 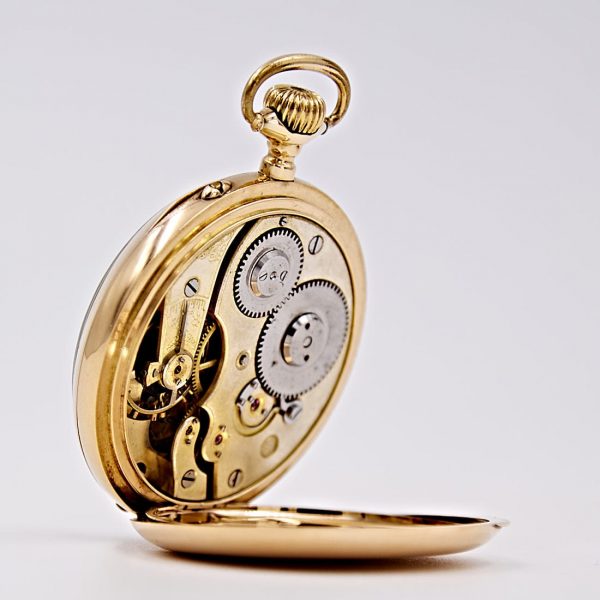 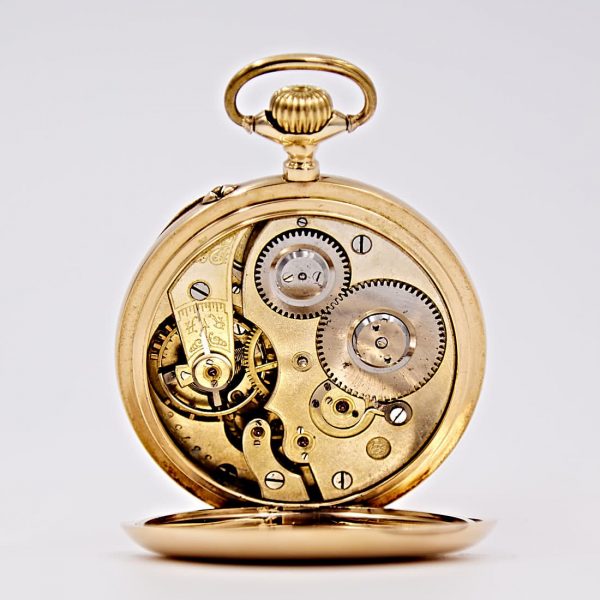 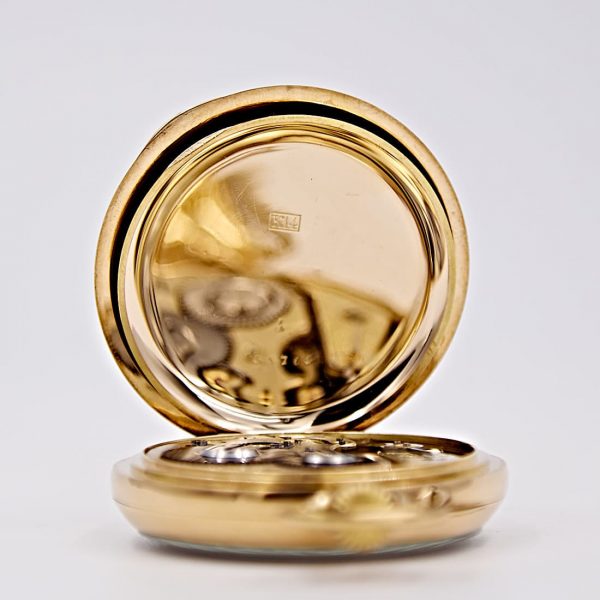 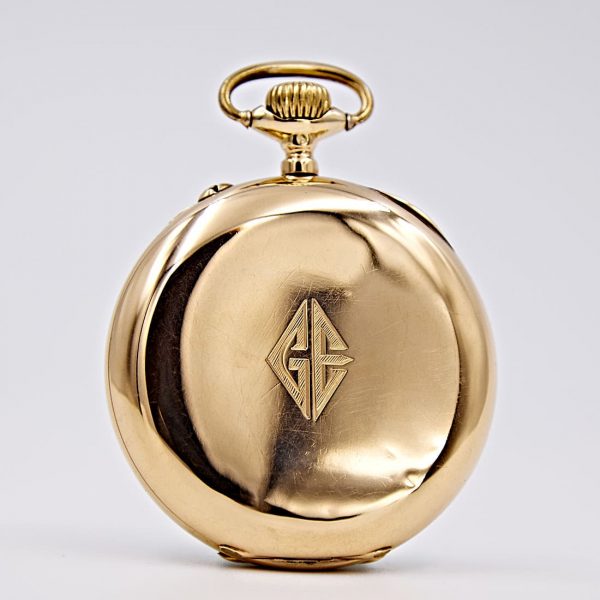 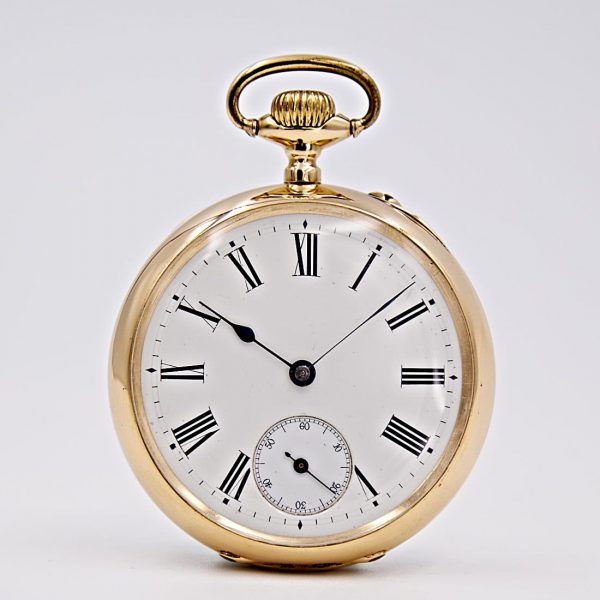 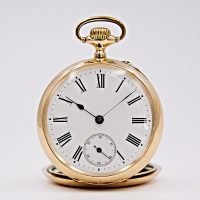 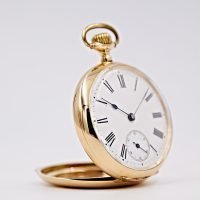 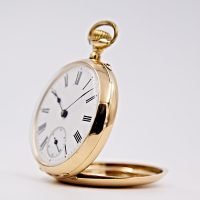 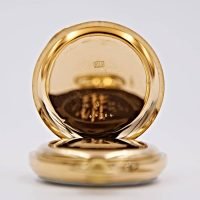 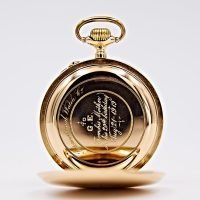 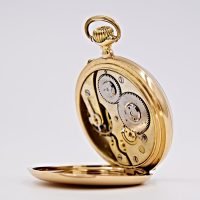 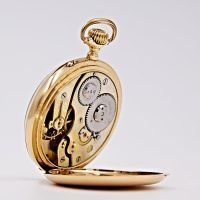 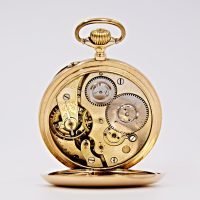 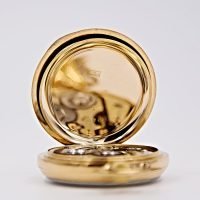 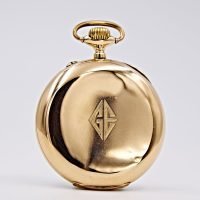 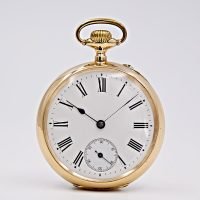 Pre-Owned Solid 14 karat gold open face pocket watch by IWC (International Watch Company) of Schaffhausen. Polished rear case lid engraved with the initials, “GE” and inner lid engraved, “To G E from his Mother on His 20th Birthday – August 21, 1919” as well as “International Watch Co”.. Gilded 3/4 plate 16 jewel manual wind mechanical pin set movement signed IWC. Porcelain single sunk dial with blued spade hands. Note: Though the personalization makes it seem this watch might have been new in 1919 the serial number and design suggest is was made in 1888. We presume it was passed down to GE on his birthday having been owned by a family member. Overall weight 81g – overall diameter 44mm – circa 1919

What is in a name? For IWC Schaffhausen, quite a bit. While IWC is a Swiss watchmaker, the company retains the original name given it in 1868 by its American founder, the International Watch Company. The 27-year-old manager of a leading watchmaker in Boston, Florentine Ariosto Jones envisioned the potential of combining Swiss watch making skills with American engineering and production. He originally approached the region in Switzerland where most watchmakers were located, but they didn’t embrace his vision. This may have been for the best, as an industrialist with watchmaking roots named Heinrich Moser had constructed a large dam on the river Rhine on the opposite side of Switzerland. The young American’s vision of bringing modern manufacturing to the art of Swiss watchmaking found a receptive home in Moser’s town of Schaffhausen. The International Watch Company also found a home.

For several years, F.A. Jones built factories and made watches but he eventually returned to America, at which point the Rauschenbach family took control of IWC; they would run IWC successfully for four generations. IWC was known for producing watch components for other watchmakers and had several innovations, but the Portugieser watch, for which IWC is known, arrived in 1939. Aware of IWC’s reputation, it was the result of two Portuguese businessmen’s request to produce a large sized wristwatch for the navy that would be as accurate as a marine chronometer. Soon after in 1940, IWC produced other large watches for German pilots, which at over 46mm became known as the Big Pilot’s watch. When in 1944, IWC produced a wristwatch for the British Army, its reputation as a manufacturer of military watches was secure.

Later in 1950, IWC introduced its first in-house developed automatic movement, which they used to power their new Ingenieur watch introduced in 1955. The Ingenieur was subsequently rdesigned in 1976 by Gerald Genta, the famed designer of the Audemars Piguet Royal Oak. When the world soon became smitten with undersea exploration, IWC contributed the Aquatimer dive watch in 1967 that was water-resistant to 200 meters and used a rotating time bezel under the crystal.

Committed to its founding principles of combining modern industrial engineering with the art of watchmaking, IWC has introduced several innovations over the years, including producing a split-seconds chronograph with a simpler and durable movement, and during the height of the demand for quartz watches, a mechanical perpetual calendar movement with moon phase. IWC ownership has changed hands several times over its history and it has evolved with the changing world, but it remains what it has always been, the International Watch Company in Schaffhausen, combining modern technology with the art of Swiss watchmaking.

Go to Top
We will be closed September 18th through September 27th for vacation.