The Watch that Made Greenwich Famous 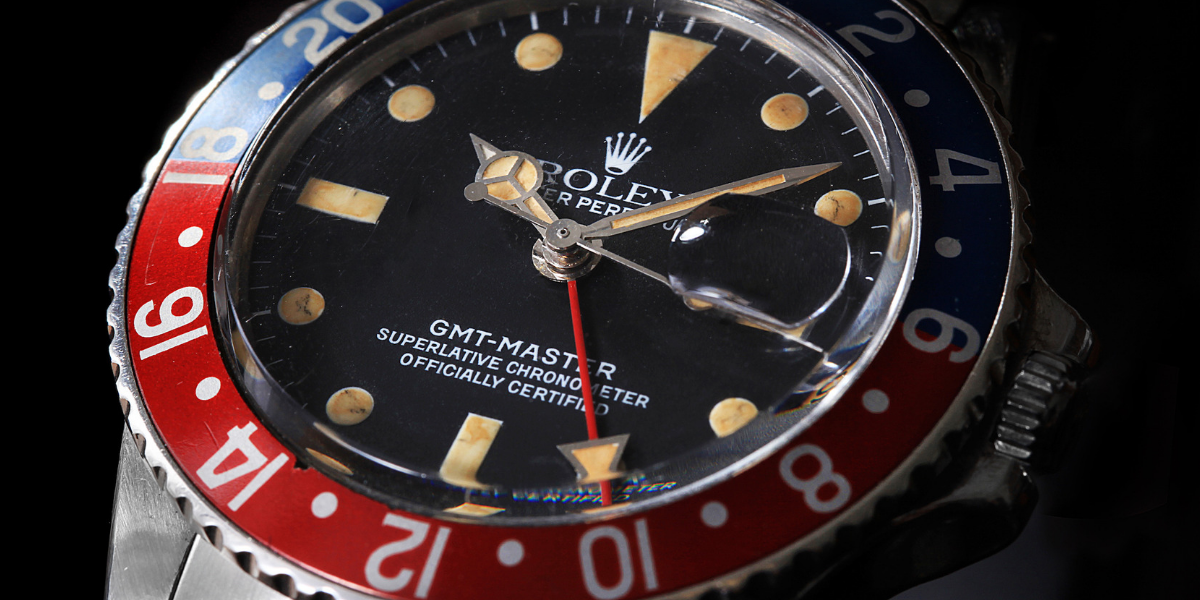 If there were to be a top 20 list of the most iconic and sought-after wrist watches ever produced, the Rolex GMT Master would be high on that list. The GMT’s distinctive colored bezel, clear legible dial, and its innovative time zone features prove both functional as well as attractive, as evidenced by a production run of well over 50 years.

The origin of the GMT Master, though not well-documented, seems to trace back to the early 1950s as a collaboration between Rene-Paul Jeanneret, Rolex’s public relations director, and Captain Frederick Libby, a pilot working for Pan-American Airlines. Jeanneret responded to an inquiry from Pan-Am for a watch that both displayed the time and the date in a clear and easy-to-read manner, and had the ability to display a second time zone.

Jeanneret, with Libby’s advice, modiﬁed an existing watch case that already had an external revolving elapsed time bezel and re-marked the bezel to display 24 one-hour intervals. An existing automatic movement was redesigned by adding a wheel under the dial that revolved only once in 24 hours, combined with an extra-long arrow-tipped hand that pointed to the bezel.

The result was a tough, water-resistant, selfwinding watch that would display local time as well as military time or, if the bezel was offset, the time in some other city. As pilots get their weather reports in 24-hour time and also regularly travel through multiple time zones, both features were rather useful.

The rare original model of the GMT, model 6542, was equipped with a Bakelite bezel insert that was colored with the classic red/blue motif, but as the bezels proved to be fragile, they were quickly replaced with a similar anodized aluminum insert with the same coloring.

That ﬁrst model was quickly replaced with the more typical 1675 model, which also featured protective shoulders built onto the side of the case to prevent knocking off the crown, a larger arrow hand to aid in visibility, and an improved movement that was more highly jeweled and more precise.

Although the GMT was improved over the years, the classic 1675 has proven to be very popular with watch collectors. The “Pepsi” bezel, as it has come to be called, seems to have universal appeal. These watches are highly repairable and restorable, as Rolex had them in production for so many years and has maintained a good supply of spare parts. Only the original tritium-coated hands and dials are not easily replaced, as Rolex has moved to a new luminous treatment, and on a vintage watch these new parts glow too brightly for most collectors.

The GMT was a technical and ﬁnancial success for Rolex and has been considered a valuable instrument and badge of honor by pilots and world travelers since its introduction. Be prepared to spend $4,000 if a ﬁrst-rate 1675 vintage GMT is on your wish list, but that is a great bargain, as the newest version retails for $7,000.