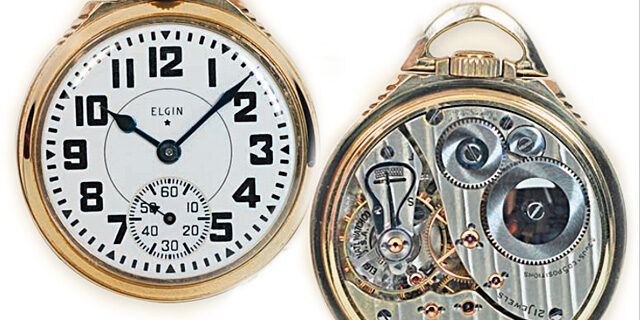 Although the majority of watch collectors collect wrist watches, the compelling history of pocket watch manufacture, combined with the pleasure to be derived from opening the back, watching the pulsations of the balance wheel, and listening to the steady tick, can often instill a new level of appreciation.

From the late 19th century until the mid 20th century, many manufacturers in Switzerland, Great Britain, and the United States produced incredibly high quality pocket watches known for accuracy, reliability, and durability. Today, pocket watch prices are a bargain against comparable wrist watches.

The Industrial Revolution brought true consistency and interchangeability to watch manufacture and sped production to unheard-of levels, driving prices downward and quality up.

Further, chemists, metallurgists, and physicists worked out suitable lubricants, mitigating the effects of magnetism, and myriad other issues affecting the timepieces of the day.

evidenced not only in its ability to keep time but also in style and ease of repair. From the hand-ﬁred porcelain dial to patterns engraved onto the main plates (damascening), to the solid gold wheels and jewel settings of the movement, the pride designers and technicians built into these machines is quite evident.  As trains of the mid-19th century shared track in opposite directions and computerized switching and signal systems hadn’t yet been invented, the safety of personnel, equipment, freight, and passengers fell to conductors and engineers who relied on their mechanical watches.

An 1891 train wreck in Kipton, Ohio, which was shown to be caused by faulty timekeeping, was the catalyst to bring about rigid standards to which watches would be made, serviced, and inspected. Though the criteria evolved over some years, most railroad watches of the day had characteristics in common.

Railroad watches tended to have at least 19 jewels (synthetic ruby bearings), bold, easy-to-read hands and Arabic numerals, open-face cases, and a system for changing the time that was not accomplished through the winder or “crown” but instead used a setting lever, which ensured that the time could not be thrown off by accident.

As few people wear a pocket watch on a daily basis, they are well-suited for commemorative gifts such as graduations and retirements. Given that these ﬁne timekeepers can be found readily from any number of sources—often in superb condition—for under $500, they offer fantastic value