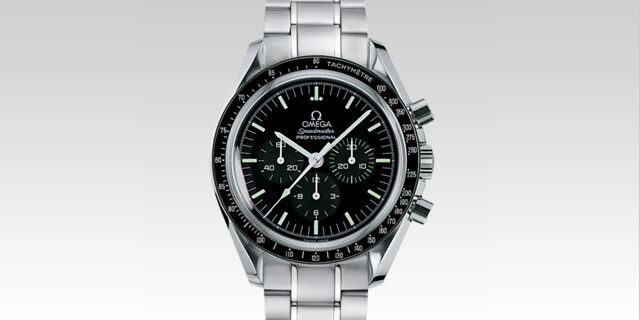 It’s rare that a wristwatch features prominently in an important historic event, yet the Omega Speedmaster Professional Chronograph did. In the early 1960s, during planning for NASA’s project Gemini, engineers envisioned the need for a space-proof watch, yet did not have the time to design and custom-build one, so, as the story goes, they sent two engineers to buy off-the-shelf models, which they tested rigorously. Only the Omega met NASA’s needs; even Rolex’s comparable Cosmograph was found lacking. The fame of the “Moon” watch was secured.

Originally introduced in 1957, the first Speedmaster Chronograph looked much like it does today—large, black, and complicated, with a black tachymeter ring on the outside of the crystal and a dial with three registers for elapsed time recording, and luminous hands trimmed in white. The first generation was powered by the Omega 321 movement, which was a 17-jewel column wheel chronograph; later models switched to the Lemania 861 movement.

With the acceptance of the Speedmaster by NASA, Omega perceived the marketing potential and made two changes: They added the word “Professional” to the name of the watch as well as the dial, and they created a new case back that bore the legend “Flight-Qualified by NASA For All Manned Space Missions” and “The First Watch Worn on the Moon.” Since then, Omega has continued to market the Moon watch with only minor changes.

The Speedmaster had its ten seconds of fame during the ill-fated Apollo XIII Mission. Coping with a series of catastrophic equipment failures, astronaut/pilot Jack Swigert had to turn on the command module engines to adjust the angle of re-entry into the atmosphere Lombardwithout the use of the ship’s computers and guidance systems. So he used his wrist watch to monitor the adjustment. Hollywood further ingrained that story in the movie “Apollo XIII,” as Kevin Bacon as Swigert timed his seat-of-the-pants maneuver.

The Moon watch has been in production almost unchanged for 40 years, and finding nice examples is relatively easy. Restoration is also simple, as Omega can supply most of the original parts, including the most-often-needed crystal, dials, hands, and bracelets.

Factors that determine value include condition and originality but also vintage. Pre-NASA watches with the earlier movement seem to be more desirable to serious collectors. Original box and papers also enhance the value, but not tremendously. However, a watch worn by NASA personnel can be dramatically more valuable. The watch owned by NASA pilot Michael Collins on the first moon mission, Apollo XI, brought more than $25,000 at an Omega theme auction held by Antiquorum in 2007.

The beauty of the Speedmaster, aside from its aesthetics, is its terrific value. While a comparable Rolex chronograph from the same period trades for a minimum of $12,000, a nice example of a Moon watch can be bought for under $3,000. Perfect, rare, or historic provenance watches can of course bring more.