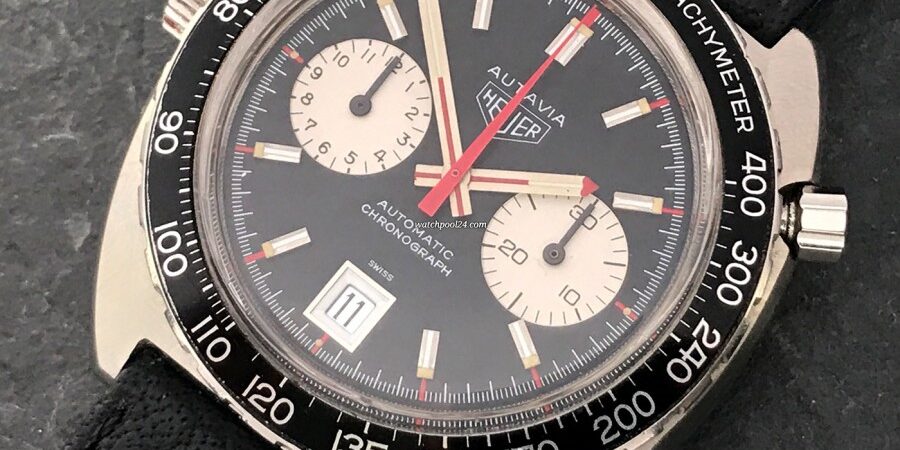 When Jack Heuer, an avid skier and engineer, joined the family watchmaking business in 1958, he saw tremendous opportunity in rugged mechanical watches for the sporting world.

Heuer, established in 1860, had long manufactured pocket and wrist models, including specialty stopwatches and chronographs, but new technology enabled shockproof watches and water resistance to be combined. One of Heuer’s earliest and most successful products was cleverly aimed at both motorists and aviators — the aptly named “Autavia.” The first generation were clocks for aircraft cockpits or dashboards. In 1962, Heuer introduced an Autavia wristwatch that featured chronograph functions as well as a rotating bezel that could be used either for calculating elapsed time or as a tachymeter. Heuer saw that the next step was to incorporate a self-winding system into a chronograph watch—a seemingly insurmountable task.

In secret cooperation with Buren Watch SA, which had already developed a thin automatic movement with a small inset rotor for self winding, and Dubois-Depraz SA, who had great expertise in chronograph module design, Heuer and fellow watchmaker Breitling invested over 500,000 Swiss francs ($115,000) in the project. Their self-winding chronograph was unveiled in 1969. The task was accomplished by hiding a micro rotor under the stopwatch features. The first generation of automatic chronographs is easily distinguished by the winding crown at an unusual “lefty” nine o’clock position.

Heuer marketed the new movement in three different models — Autavia, Monaco, and Carrera. The quality of these new products propelled them to the forefront of race timing, with a huge gain in market share. By 1969 Heuer was producing 25% of all the chronographs in the world. Adding to their domination was sponsorship of world-famous drivers and teams, including Jo Siffert, Steve McQueen, Jacky Ickx, and the entire Ferrari racing team.

In 1972, Heuer struck a deal with the Viceroy brand of cigarettes, which included a coupon in each pack that in time could be redeemed for a black-dial Heuer Autavia watch at a special price of $88. This campaign, which featured Parnelli Jones, helped to sell an amazing 16,000 chronographs between 1972 and 1974. The special black-dialed version with beautiful red trim has been known since then as the Viceroy.

If an Autavia is a must-have, be careful to buy examples in perfect cosmetic condition, as parts to repair the exterior are made of unobtainium. Interior repairs (i.e. basic service or movement parts) are easier, and a good watchmaker can effect most repairs.

One of the most appealing aspects of collecting in this genre is that there are almost 60 variations and models of Autavia alone, making collecting exciting and varied.

Values of these watches have risen as race-related paraphernalia has appreciated and also because comparable new watches are expensive. Heuer has cashed in on their historic models by reissuing some of them. In some cases, original watches in great condition can cost less than the reissues, which adds to the appeal of searching out originals. Prices generally range from about $1,500 to $3,500.