Watchworks Hole in One Winner 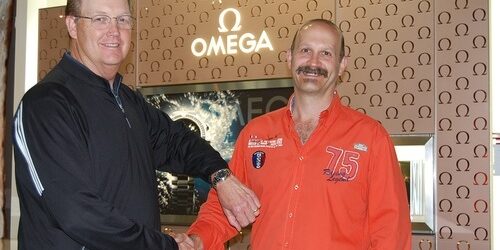 This summer in a co-promotion with Omega watches, Watchworks has been sponsoring hole in one contests at club tournaments in our region.  This week at Riverside Golf & Country Club we gave away our first watch.

Carl Bergstrom of Brush Prairie, Washington, came off hole ten 3 strokes over par a little frustrated.  He looked out over hole eleven, a 167 yard par three and told himself he could do better.  Using afour iron, Carl drove the ball straight to the green, watched the ball drop very close to the pin and roll out of sight.  “The green sloped a little away from the tee, so I could not tell if the ball dropped into the cup or if it simply rolled down hill”, he told me.

Kerry Holtmann, the official hole judge, witnessed the shot and watched the ball drop into the cup from a shaded area near the green where she was sitting.  When she jumped up and yelled, not only Carl and the others playing his hole knew he had won the prize, but teams from adjacent holes also heard the commotion and came running over.

This was Carl’s first hole in one.   According to Golf Digest magazine the odds that an amateur  golfer will make a hole in one are roughly 1 in 12750 making this a highly improbable event.

The watch that Carl won was a stainless steel Omega Aquaterra.  It is his first Omega and likely will become his favorite watch out of the six or seven he owns as it has such a great memory associated with it…

The Coulson Limited Edition has a multi-piece carbon-fibre case and a gradient orange dial, a striking symbol of Coulson Aviation’s pioneering mission.

Craving a sweet vintage GMT-Master? What's your so

Stunning watch with a lot of versatility! ----- It

Then and now! The vintage 1967 Air-King to a moder