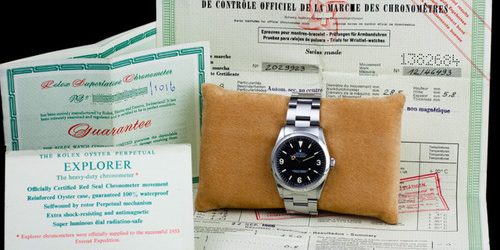 Hans Wilsdorf, founder of the Rolex Watch Company, forever changed the industry when he created a plain watch that could withstand hard use.

Prior to this, watches tended to be worn gently in dry conditions. Wilsdorf’s revolutionary, “Oyster” case allowed a watch to be sealed so securely it could be worn in extreme heat, cold and humidity, even under water. Athletes, scientists, military personnel, and explorers flocked to buy Oyster watches.

Often the most desirable vintage Rolex watches are the least expensive steel watches made for sporting or extreme use. Fancy gold or steel and gold dress watches take a back seat to the high-octane sports models.

One of Rolex’s bulletproof sports watches was originally introduced in the late 1940s with the name “Explorer.” The plain black dial with luminous figures and hands gained fame on the 1953 British Everest Expedition. Whether Sir Edmund Hillary actually wore a Rolex on the summit is unclear; both Rolex and a lesser known British brand called Smith’s De Luxe Watches claim that honor.

The Explorer featured a monoblock steel case with integrated case lugs, a threaded and gasketed case back, and the patented locking crown system. Through the years the movement evolved, but most were equipped with a caliber 1560 movement, an automatic-winding, straight-line lever escapement model with 25 jeweled bearings and a beautiful nickel finish.

The earliest dials were glossy black, with gilded or silvered lettering and luminous radium hands and figures. The most typical vintage model of the Rolex Explorer 1016 evolved to a matte black dial, white lettering, and painted tritium markers and hands.

Factors that determine the value of early Explorers are the originality and condition of the dial and hands. Most other parts can be sourced new or replaced from more common models, but Rolex will no longer supply the earliest dials and hands. In later models, the tritium was replaced with a luminous compound that glows so brightly the watch no longer looks old. Neither radium nor tritium dials glowed much when new, and 40 years later they probably won’t glow at all. Any watch with bright dials should be viewed with suspicion.

Be sure that the serial number has not been worn off the case, altered, or purposely removed. Most Oyster cases are marked on either end between the lugs where the bracelet or strap fits. Over the years, the sharp ends of the bracelet can dim or erase the serial numbers and collectors tend to avoid these cases. Re-engraved numbers may be incorrect.

An original sales slip with date of purchase and matching serial number or warranty papers are desirable. For a few years Rolex provided the bulletin issued by the Swiss Institute for Chronometer Tests, showing 15 days of timing tests run with the watch in six positions at three different temperatures. A watch complete with this rare document can be significantly more valuable, but make sure the numbers match and the document has not been altered.

Rolex Explorers were made for more than 50 years and continue to be an important part of the Rolex line, (though improved and with a new model number). Prices vary widely. A plain 1016 tends to bring $3,800 in average condition. One with complete box and papers, like the watch pictured, sold at an Antiquorum auction for $9,600. An original Tiffany & Co. model could fetch more, and a documented model made for the German Air Force sold for $45,600. A rare example of the same watch, marked “Space-Dweller” and made briefly for the Japanese market, brought $48,000.